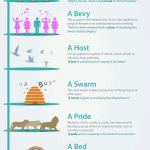 1.) A Stand
This versatile collective noun is used in botany, forestry and agriculture. It denotes a group, grove or small forest of trees that belong to the same species. A forester might say, “The stand of saplings is growing quickly due to the abundant rain.”

2.) A Clump
Often applied to plants, this botanical term denotes a cluster of tightly grouped stalks, plants or trees. It can be applied to reeds, moss, seaweed and a variety of plants. Here’s an example: “A clump of fragrant lavender plants is a joy to behold.”

3.) A Brood
Used in zoology and farming, this collective noun describes a group of hatchlings or young animals born around the same time. For example, “Helena, the hen, raised a large brood of chicks this spring. Farmer John is expecting a second brood this summer.”

4.) A Bevy
This is another bird-related term, but it’s also applied to a group of females or an overabundance of something. An observer might say, “With his charm and good looks, a bevy of beautiful girls is always chasing Gregory.”

5.) A Host
Famously used in William Wordsworth’s poem about daffodils, this versatile collective noun can be applied to a group of visitors, a flock of birds or any other large gathering. Here’s an example: “A host of colorful posies is swaying in the breeze.”

6.) A Swarm
The word swarm implies a pesky bout of flying insects or other pests. It’s also a verb that denotes a cloud of flying bugs. When referring to insects, one might say, “A swarm of gnats is enveloping the volleyball team.”

7.) A Pride
Similar to a flock, a pride is a collective noun used to describe a group of lions or impressive birds, such as ostriches or peacocks. Here’s an example: “A pride of lions is relaxing in the shade of an acacia tree.”

8.) A Bed
This marine term is used to describe the habitat where a colony of mollusks thrives. It is often applied to clams, mussels, oysters and similar bivalves. For example, a marine fisherman might say, “According to the map, a bed of mussels is located in the shallows offshore.”

9.) A School
A school isn’t only a place of learning. It’s also a term applied to a large group of social fish. Here’s an example: “A school of yellow tang fish is crossing the bay, and hordes of snorkeling tourists are rushing into the water.”

10.) A Band
This collective noun is exceptionally versatile. It is used to describe a tribe, a set of people with common interests, a group of musicians or a flock of animals. For example, “Robin Hood traveled through Sherwood Forest with his band of merry men.”

These collective nouns are just a few of the odd English words that are used to describe groups of people, animals or plants. If there is a particular collective noun you like or one you find confusing, share it in the comments area.